Goodbye Heisei, hello Reiwa, that’s the buzzword of the moment among our Japanese friends in Johor Bahru and back home, as the release of Japan’s new era name marks the nation’s first imperial succession in three decades, and the new era will start in May when Crown Prince Naruhito ascends the Chrysanthemum Throne Emperor Akihito!

Following the decision by the Japanese government to waive the requirement of a short-term visa for Malaysians on 1st July 2013, we have seen a significant increase of travellers from both nations and improvement of convenience in doing business. The relaxed visa program has also seen more Japanese investments coming into Johor Bahru, turning townships such as Taman Molek and Permas Jaya into “Little Japan” for ethnic Japanese keen to relocate and make Malaysia their second home. Such is the appeal of Malaysia’s second largest and southernmost city that the local Bon Odori festival now draws 100,000 people, held annually in Johor since 1999.

Food is an integral part of a trip and though food we can learn about its culture and way of life. The izakaya is an undeniable staple of Japanese social life, especially after once you start working in Japan. From drinking sessions with easy-to-grab meals with co-workers or catch-ups with friends, the izakaya quickly becomes a social staple, and for some, their second home.

Stepping into the warm and brightly-lit interior that follows the traditional Japanese style of decor with the prominent usage of wood furnishings and neutral colours., we were greeted with upbeat Japanese music jingling in the background, and the friendly GM of the latest Kemuri outlet in Permas Jaya (opposite Renaissance Hotel), Mr Yugo Harada! Originated from Hokkaido with a further 7 establishments in Okinawa, JB was proud to receive the first overseas outlet of Kemuri Japanese BBQ in Taman Molek in 2015, before welcoming a brand new izakaya-inspired outlet in Permas Jaya early this February!

For those who are smoky-food-stench conscious, the place was rather well-ventilated as well, with the open kitchen thoughtfully designed to keep out the smoke from the grills yet near enough for us to catch a whiff, and the culinary action that happens within, so don’t worry. Each table also comes with hooks on the underneath for us to hang our bags and other belongings, making sure they are well insulated from the smoke and grease while creating more space for the dishes to be served shortly. Incredibly attentive, isn’t it?

AND we couldn’t possibly miss the two “mouth-watering” wall mural designs on both sides that are produced by a local artist. So much about blossoming Japan-Malaysia friendship and collaboration, right?

Boasting a current capacity of 58 pax, with private dining rooms to come in the middle of the year, Kemuri Sakaba offers a wide variety of menu at a very reasonable price for every occasion. Beyond the wonderful bar grub and sake pairings, we were surprised to find this unbelievable offer where we can drink-all-you-can to our hearts’ content. As far as we know about this Nomi Houdai, we can have any drinks including alcohol on the menu for two hours with a mind-blowing charge of only RM50. Cause for celebration? Be warned, enjoy your drinks with discretion or it will set you RM100 poorer for cleaning up the mess!

Being all about eating, drinking and being merry, an izakaya experience is just incomplete without these vegetables and meat skewered on a stick that’s grilled to perfection over a charcoal fire. There are two main types of yakitori, namely shio (only seasoned with salt) and tare (seasoned with the izakaya’s special sauce). Personally, we prefer shio over tare, but the special sauces here are irresistible as well.

By the way, did we mention that Kemuri means “smoke” in Japanese? Now you know…

Feeling adventurous, we tried the Yakitori Assorted Set of seven sticks. Surprisingly, the chicken gizzard and chicken heart were not excessively gamey and had a chewy, springy texture without any leathery sensation while the chicken liver is another must-try with its rich creaminess. For the conservatives, the BBQ chicken and pork meatballs tasted just as good. Overall, an excellent pairing option to go with any cold, refreshing beer in this weather. Remember the Nomi Houdai 🤣?

There’s no way we could miss one of Kemuri Sakaba‘s signature dish – Gyoza which up to 400 portions being made by hand and served weekly. Interestingly, the gyozas’ filling is made of a combination of pork and chicken with fresh finely chopped chives; hence the taste will lean towards a heavier side, but it’s acceptable for us. Plump, juicy with good skin to filling ratio and a lovely charred bottom, enough said!

When it comes to okonomiyaki, the question is just “how do you like your grill”?  For the uninitiated, the word “okonomi” in okonomiyaki means how you like while “yaki” translates to grill. Each okonomiyaki took about 5 minutes to cook, with the chef expertly flipping over the “pancake” repeatedly until we saw its perfectly browned surface. As soon as our Teppan Okonomiyaki was evenly cooked, plated neatly and finished off with a smear of okonomiyaki sauce, streaks of mayo, seaweed and bonito flakes, we dove in for the bite. The chewy diced and succulent seafood elevated the texture of the pancake along with the softer crunch from the cabbage.

The smell of the fragrant pork bone broth immediately hit our noses when our Ramen, Egg & Chasyu arrived. Boiled with pork bones over a long period, the broth was rich, creamy and very satisfying, while the thin noodles had a snappy, firm texture which made it very enjoyable to slurp. The half-boiled ajitama (ramen egg) was spot on as well, but it’s the marinated braised pork here we enjoyed the most. The regular chasyu here is quite lean and thus a little tougher than we think what most people would prefer, texture-wise, but we love it, so much so that we had to order another standalone serving to satisfy our cravings.

Next up, the Fried Rice with Starchy Sauce reminds us of our favourite Chinese-style braised rice. The rice in this instance had an eggy taste and strong “wok hei”, pairing well with the thick umami sauce that had an earthiness from the egg white used to cook it. After all, there’s nothing like tucking into a bowl of fragrant fried rice drenched in savoury, starchy sauce and paired with a generous serving of chasyu bits. Agreed?

If you still think that eating good Japanese food in town means having to splurge on expensive meals, think again. Drawing feedback from their Taman Molek branch, Kemuri Sakaba launched its new lunch sets in mid-March which are only wallet-friendly, but they’re also completely drool-worthy as well! Each Kemuri Lunch Set comes with complimentary sides such as Korean pickles and kimchi, bean sprouts, salad and egg and a choice of our main. Hot on the heels from the latest trend that took Japan by storm, our natural selection is the Japanese Hamburg steak. Now, we no longer have to fly to Japan to get our hands on these juicy treats. The seared patty made of quality pork and beef is big on flavours, very tender and melts in our mouth, and the speciality sauce lent a sweetness that complemented the umami flavour of the meat well. If you are suffering from an overdose of meat, we suggest going for the Assorted Fried Fish which are oh-so-crispy and super value for money!

According to Yugo-san, izakaya bars in Japan are generally affordable to mid-range, depending on the quality of the food and establishments. With Kemuri Sakaba, Yugo-san hopes to blur the lines between tachinomiya (standing bar) and izakaya (bar with seats) to offer a casual dining and drinking scene that appeals to both native Japanese and the local community. With a menu that’s both family and wallet-friendly, we can now enjoy impeccable service and matching sake with food to bring out the “umami-ness” of Japanese cuisine to achieve an authentic dining experience, outside of Japan. 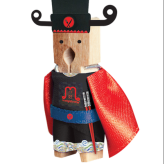 ［独家专访］动静张弛的笔势与跃然纸上的形神兼备，日本著名書道家本田蒼風这一次决意「立足新山」！Centuries of culture converged in Johor Bahru, thanks to Soufu Honda!

原来你与日本四国零距离！濑户内海的时鲜，香川县的讃岐乌冬，说来就来。A taste of Shikoku, delivered to JB by "Shinkansen" via Kokomo Sushi